☐ Week 4
Tango box / Crusada
​Maxfield Wollam-Fisher is a cellist, dedicated teacher, interdisciplinary producer, and avid social dancer who has played tango and danced all hours of the night at milongas and concert venues around the hemisphere. Maxfield holds cello performance degrees from Indiana University and the University of Wisconsin and he has studied motion and body awareness through the Feldenkrais Method and contemporary choreography and dance.

His work has included performances under choreographer Sally Gross, arrangement and music direction of the Rite of Spring with Li Chiao-Ping Dance Company, and performance of tango music with Julian Peralta, Pablo Aslan, Victor Lavallén, Hector del Curto, Pablo Ziegler, Pedro Giraudo and Cuarteto Tanguero among others.. Currently he is associate chair of the string department at the Levine Music School in Washington, DC.

Maxfield began playing and dancing Argentine tango in 2010 and his experiences and approach to the music and motion of the art form have always been intertwined. Maxfield's interest in the connection between sound and physicality led to the creation of the Mad City Live Tango Festival in 2014 in collaboration with Homer and Cristina Ladas and Cuarteto Tanguero. Since then he has been a director of the Tanguero Workshop in Indiana and Toronto which brings renowned tango musicians together with students from around the world.

In 2016 Maxfield founded Da Capo Tango which has grown as the preeminent dance orchestra in DC and serves as a platform for creative performance of both classic and new tango music. He also directs Orquesta Tipica Loca for the Loca Tango(h) Tango Festiva and is a co-host of “Bienvenido al Tango” on Takoma Radio, WOWD 94.3 FM. Since 2019, Maxfield has worked with bandoneonist Heyni Solera in their duo Arco & Aire presenting concerts and collaborations with contemporary tango composers and arts organizations like InSeries Opera Company.

Maxfield works to promote both new tango and collaboration between artists across the disciplines of tango in order to raise the collective knowledge, access, and level of tango music and deepen our connections with each other and the global community. 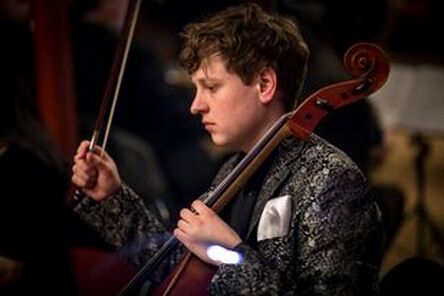 Praised for her “soulful bandoneon” (Washington Classical Review), Heyni Solera is a sought after bandoneonist in the Washington, D.C. metropolitan area. In 2019, Solera has launched her career on the international stage with her orchestra and chamber music performances in Argentina and Australia, and continues to collaborate with prominent musicians in the tango music scene.

Heyni currently actively performs in the Washington, D.C. area with the Da Capo Tango Orchestra, and her cello and bandoneon duo, Arco & Aire. Also a music scholar, she holds a Master of Music in Ethnomusicology from the University of Maryland. Her research explored the role of gesture theory in explaining how tango and bandoneon can be taught via tango festivals.
​
Heyni began her bandoneon studies in 2015 with Santiago Segret. In 2019, she was able to fully immerse herself in tango and bandoneon during her time in Buenos Aires, where she continued her bandoneon studies with Segret and renowned bandoneonist Ramiro Boero. During this time, she also had the privilege of performing with several of Argentina’s most prominent educational tango orchestras, such as the Orquesta de Tango de la UNA, Orquesta Escuela Orlando Goñi, Orquesta de Tango del Conservatorio Superior de Musica Manuel de Falla, and Ensemble de Tango de la UNSAM under the direction of Ariel Pirotti, Julian Peralta, Adrian Enriquez, and Ramiro Gallo, respectively.
Past projects include playing in the orchestra of the highly praised IN Series production of Le Cabaret de Carmen at Source Theatre in Washington, D.C. and at Baltimore Theatre Project in Baltimore, Maryland. During the pandemic, Heyni has produced two mini-series, Today's Tango with Heyni and Discovering Troilo, performed in many virtual concerts, and recorded an EP with Arco & Aire, which is to be released 2021.
For the past several years, Heyni Solera and Maxfield Wollam-Fisher have been actively working together in bringing live tango music to the Washington D.C. area through their performances with Da Capo Tango.
​Their collaboration led to the formation of the unique instrumentation of a cello/bandoneon duo that focuses on playing tangos not commonly played on the dance floor and tangos written by composers who are alive today. Their mission is to foster a sense of community and collaboration between tango musicians, organizers, and dancers.
They also provide outreach to new audiences that may not be aware of tango’s resurgence by working with directors and artists from other genres.